“Battle scars”, are what my friend Cheska calls them. I like the way she thinks.

I have stitches on the right side of my neck, from a lymph node dissection. A hole in my throat now closed up from a tracheostomy, and a donor-free flap, taken from my left radial forearm, that was stitched into my tongue and mouth after the cancer removal. Finally, to cover up the open flesh of the arm: a skin donor from the top of my left thigh.

I’ve been told that I am brave for battling Cancer. I find that phrase interesting. I think surgeons and healthcare workers are brave for what they have to do every day, facing difficult situations that they have to perform regularly in.

Was I brave to go through surgery for stage 2 squamous cell carcinoma? I don’t quite see it like that. Surgery seemed like it was just a last-ditch effort made to ensure I could continue living. Not something I would seek out of courage. I found the absence of choice and fell into it. Or perhaps I’m too hard on myself.

I fought to finally get my diagnosis, and I feel certain about that statement. But was the surgery difficult?

No, I was under amnesia the whole time. I felt like I had no active role or opinion in the whole process leading to it. I signed my consent to the operation without thinking much of how it could affect me later on, because I was scared. Scared that this cancer had spread.

To be a patient is to be truly passive. Patience, from Latin, “patiens,“: meaning, to suffer or bear patiently, the “interventions of the outside expert”.

“What will you do for your 24th birthday?” my nurse L asks

Around November 2021, before my second last biopsy at the Oakville Trafalgar Memorial Hospital, I finally got my first tattoo. A simple one, just the text “18.55.6.215” in a source sans pro font. The number is significant to me, and I’d argue it is significant for internet history. It now lays close to the incision points of my left arm donor site.

18.55.6.216 was the first IP Address assigned to internet activist Aaron Swartz’s laptop at MIT Campus on September 24, 2010. “Gary Host”, as Swartz named the laptop, was used on that day as the beginning of a three-month guerilla academic journal downloading process that led to his indictment. But, in the end, it wasn’t JSTOR against Swartz, nor was it MIT; it was Swartz versus US copyright law. And nobody really won that trial. On January 11, 2013, at only 26 years old, Swartz commits suicide. Many say the US government hung him and left him to dry. It seemed that a bit of the collective human spirit died that day, as well.

I suggest you research his life and legacy in your own time, as my short summary of one facet of his life doesn't suffice for the magnitude of the communities that he has led. To me, this tattoo signifies two things: To be clever and to be cautious. As I am realizing more and more, institutions and individuals who may seem to be open to the radical imaginings of an open society will end up doing everything they can, to shut you out from even trying.

Not because your ideas are bad, or that you're unliked, but for reasons far beyond your control. Because, change is terrifying. Comfort is our worlds' greatest blessing, and deepest curse.

A fore-warning: my cancer survival diaries are a bit heavier in nature. This blog is not to be treated as a way to find professional medical advice. Please seek help from a health professional if you have any personal concerns.

I can't enunciate like them, and I can't move as easily as them. Although, I wish I took advantage of those former abilities when I could. Although, these impairments are minor in the grand scheme of squamous cell carcinoma surgery. And not enough, apparently to be considered a disability, according to my hometown cancer clinic. I can talk more about disability issues in other posts.

I have only begun having these new "quirks" quite recently, after almost two years of constant medical back-and-forth, of being in two different provinces, being told one thing after the next, and after multiple, painful biopsies.

It was this one small painful sore at the back of my mouth that I lived with for a year, just barely

bump. A bump that didn't go away, and that caused me chronic pain throughout the past few months.

It was just a small little growth that seemed to change the whole course of my life in the span of a month.

In mid-February 2022, I finally heard the news that I wasn't looking for. My life drastically changed in the span of three words. During a sudden and slapdash phone update with who seemed like

an in-training receptionist, I was told the very thing that I thought was unfathomable.

I called my mother the second after. I cried to my roommate. I was stuck in purgatory that day in

waiting for my scheduled in-person appointment with my head and neck surgeon.

I neglected almost all of my homework for animation school. I would sleep in until the late afternoon. Like a robot, I still taught an online class that I previously agreed to, sweating in my seat for three hours, and arriving late without a proper explanation. My news was later confirmed a few days later, during an in-person appointment with my surgeon, that I had "squamous cell carcinoma". I didn't even know what a squamous cell was at that time.

Around three days before my discharge, I was "looking too good" according to my hospital

physiotherapist. With my mother, we walked into a "sleeping research center" waiting room

that wasn't currently in use but still had its doors open. I sat near the windows as she paced around the seats, asking me why they would have such an interesting room for patients to sit in,

as she turned on the lights and tried to open the blinds unsuccessfully. I told her the lights

were too blinding. She switched them off. "Mom," I said,... "this is a waiting room for people to

sit in the darkness to get ready to sleep. For research. But they're probably just letting us

sit here because we really don't have anywhere else to go."

I wasn't allowed to leave the hospital during my stay, but I could sign a waiver to stroll the main floor. I wasn't feeling up to it, though. I still felt weak and the Tegaderm dressing on my left thigh felt like it could burst open like a gusher at any moment. I was playing Wordle on my phone for a bit, until mom approached me, and asked if she could take my photo. Her phone was readily positioned, with one hand precariously holding it at the bottom and her right index and thumb finger ready to take a snap.

she said to me.

"Beautiful lady (Leurng nui)", is what those words roughly translate to from Cantonese. But I didn't feel beautiful at that time. I still had a feeding tube sticking out of my left nostril, albeit it was favorably covered by a blue medical-grade mask. I was in my hospital gown that smelt like history, from the several patients who had worn it before me, only separated between a mass machine wash after the next. My hair was matted from not being able to wash it comfortably for the past six days. I didn't feel like myself. I felt foreign to myself.

At that time, apart from the photos of my tongue, arm, and thigh taken by the medical staff to track my recovery progress, this would be the only "normal" photo of me taken, to mark this one defining moment in my life. Just barely two megabytes to store on my mother's

I wish I took that photo. 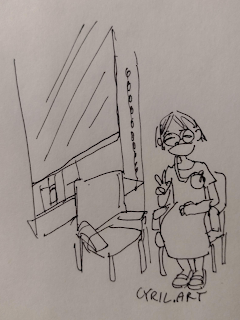 Hello! Thank you for visiting my blog.

I’ll basically treat this as a text and visual diary of my life, as an artist and animation student (about to enter my senior year). I was inspired to document my story of going through cancer this year,

at 23, and I’m titling those posts “Cancer Survival Diaries #x”. You’re welcome to give those a read. If you’d rather engage with my other more “art-focused” content, that is totally okay! :)

I’m an aspiring author and comic artist, working on a few writing and comic projects that I hope to publish soon. All of these, are self-funded or partially crowd-funded projects at the moment. Hopefully, some will be released through a publishing company, with real physical paperback books… fingers are crossed. I read fiction and watch films/TV quite often, so sometimes I'll treat this blog to review things and reflect on how I could incorporate other art into my work. I hope to work in the animation industry a bit more, too.

A little more about me: my name is Cyril W. Chen (formerly Clara Chen), I use they/them pronouns but am also flexible with others. I’m currently based in Treaty Four Territory of “Canada” (Regina, SK). If you’re interested in joining my journey through these blog posts, you’re welcome to follow and share this blog with whomever you want. It really helps a lot.

Here’s a sketch of myself to start off the blog. It’s been a while since I’ve drawn myself.

Some more links about me are below: 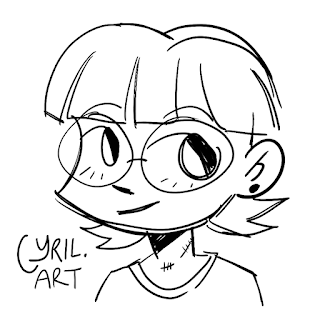 “Battle scars”, are what my friend Cheska calls them. I like the way she thinks. I have stitches on the right side of my neck, from a lymph...